I think this is a silly idea.  But, then again, so was the idea of Individual Rights in 1776. so what do I know?

But the subjects is maps, so I'll play.  I love maps.  If I had to carve up the United States, here's how I would do it: 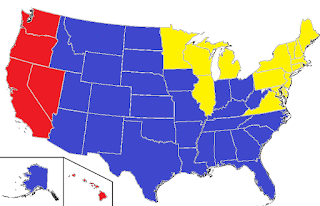 The blue would remain the United States of America (USA), capitol Memphis.  I mean, its the home of Elvis.  How much more 'American' can you get?.  Keep the flag, too, since we seem to be the only ones who love it.
The red would become the Democratic People's Republic of Oceania (DPRO), capitol Sacramento (renamed Caesar Chavez City).  Would pattern their government after North Korea, and every President would be a descendent of Jerry Brown,  Along with Mexico, would become a vassal state of China.
The yellow would become the Republic of New Sweden (RNS) or the South Canada Cooperative (SCC), with twin capitols in New York and Chicago.  They would join the EU to show how inclusive and unexceptional they are.

Russia and China become the twin world powers of the 21st century, to the acclaim of the red and yellow parts of the US.
Posted by .....CLIFFORD at 1:45 PM 6 comments:

The Boss (tm) and I attended Orthodox Easter this week and weekend at a Orthodox local church.  The Orthodox Church celebrates the Resurrection of Christ (Pascha) ata different time than the Western Church, and I must say it was an amazing and very spiritual experience.  The services are, to a western tradition, quite different.  They are also, to our modern ADD lifestyle, long.  But the time is worth it as the service is ancient, deep, and very moving.  And after the service, they feast.  No, I mean FEAST.  We ended up leaving at 3:00AM.  For my Anglican DNA, it was great to do vodka shots shouting, "Christ is Risen!"

Why were we there?  We are looking for a church.  We are seeking a church that isn't focused on on all of the silliness that now engulfs modern culture.  We aren't interested in a church that is focused on changing with the times, but one focused on changing the times.  We care nothing for being "relevant." So that rules out Protestantism.  And the Roman Catholic Church is being run off the rails by it's current Pope, who is a devotee of Marxist 'liberation theology.'  Rome is 100 years behind The Episcopal Church on going Lefty Loony, and Francis seems to be trying to make up for lost time.

What yours truly has found at the little Orthodox Church, dear readers, has me wanting more.  Will it be for us?  We don't know.  But we see few options.  Maybe that's as God wants it.
Posted by .....CLIFFORD at 4:37 PM 1 comment:

HOW I SPENT MY SATURDAY

My family has been involved in the restoration and operation of the 'USS Sudden Jerk' since 2010. 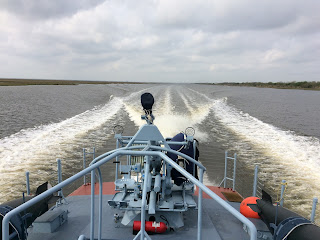 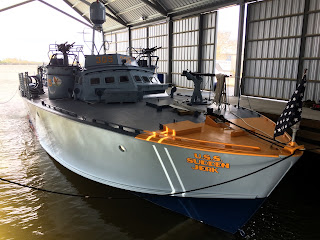 This article about why Mellennial women are looking for older men is, for an older man like me, both sad and amusing at the same time. I am happily married, for thirty years in fact, to my first and only wife. The thought of having to deal with the immiturity, narcissism, and general lack of essential life skills (like, cooking a decent gumbo, cleaning a duck, changing a washer, or fishing a Tic-Tac out of the nose of a five year old) makes me have no interest in the typical Mellennial woman, even if I was single.

Mellennial girls: If you want “men,” then start acting like women - not shallow, petty, entitled tweens. And demand the Neverland Boys in your age group grow the hell up.

OUR NON-GENDER DEFINED SUPREME BEING THINGY, WHO ART IN THE ULTIMATE SAFE SPACE...

As my wife and I find ourselves looking East to rekindle our Christian faith (and liking what we see), this piece by Rod Dreher really hit home about how feminization is driving the decline of Western Christianity.  It certainly helped with our decision to leave The Episcopal Church.  And yes, Presiding Bishop Oven Mitt makes an appearance right up front.
Posted by .....CLIFFORD at 11:41 PM No comments:

All this proves is kids do stupid things. And adults are more than willing to exploit that stupidity for their own purposes when they can. That is, after all, the driving formula for Madison Avenue.

These students bullied a loner until he snapped. The authorities knew he was going to snap, did nothing, and waited around outside the building while he snapped.

Has anyone read Lord of the Flies lately?  We know how his turns out.

NO, IT ISN’T JOHNNY DEPP.

Most distant star ever found.

I have noticed that the serious fraying of our society, and our commonly understood values, really took off in 2007. What happened in 2007?  Well, the Democrats got control of the Congress, and we all know how that turned out. But something much bigger occurred:  the iPhone was released.

The iPhone changed everything. Without it, and it’s many (and now, better) copycats, there would be no “social media.”  No Facebook. No Twitter. No Instagram. No Tumblr, whatever the hell that is.

People wouldn’t sit at a table and... text each other. (I have seen this happen.)

And what has all this inter-connectivity given us?  Access to more knowledge at our fingertips than ever in human history. Indeed. And what do with that power?  We resend cat pictures. Donald Trump memes. And build a bubble in which we can exist in intellectual safety and comfort with only our BFFs. We now self-select reality.

Which, makes us stupid, not smarter.

So, here is RSR’s RULE OF INVERSE IPHONE STUPIDITY:

GET ME A BROOM

Sheesh! This place needs a right good cleaning. I’ll get on it once I get some time. Until then, my apologies.
Posted by .....CLIFFORD at 12:01 AM No comments:

And what did we do today at the resurrected blog, dear readers?  Nothing, that’s what. That pesky work thing keeps getting in the way. All those bills. I have no idea where they come from. Evil spirits or something. Yes, that must be it.

Tonight is Maundy Thursday in the Western Church, but my thoughts theological are now turning Eastward. The Orthodox Church is small here, but VERY serious, and with a beautiful liturgy.  Orthodoxy, thankfully, hasn’t “changed with the times,” and it was refreshing to be in a church where the politics of the day don’t intrude. Have I found my peace? Time will tell.
Posted by .....CLIFFORD at 11:53 PM No comments:

HELLO? IS THIS THING (STILL) ON?

Until I can get the time to put up a new blog, this is here, and will suffice as home for my opinions, interests, and rantings until then.

It’s been a long time, dear readers. A lot has changed.

Editors Note: With the return of RSR and a recent post we made, an old friend - with the nom-de-net of 'C-Mortar,' - has surfaced again. And since he claims to possess some images which your Dear Editor would rather not have made public, RSR has been blackmailed agreed to publish C-Mortar's latest Monty Python spoof. So, with props to John Cleese, Michael Palin, and a dead parrot, we present...


Setting:
Small store with sustainably designed sales counter and a ‘Democratic National Committee Candidate Shop’ sign on the wall behind the counter. Clerk behind the counter in horn-rimmed glasses and a plaid onesie, looking at an iPad and sipping a large cup of cocoa.


The Sketch:
Activist enters the candidate shop carrying a gilded metal cage with a vertical wooden poll in the middle, and a doll dressed in a pants-suit lying on the bottom of the cage.

ACTIVIST: Hello. I wish to register a complaint.

CLERK: What do you mean "miss"?

ACTIVIST: I'm sorry, you look like Rachel Maddow. I wish to make a complaint!

ACTIVIST: Never mind that, my lad. I wish to complain about this candidate that I supported not half an hour ago in this very boutique.

ACTIVIST: Look, snowflake, I know a dud candidate when I see one, and I'm looking at one right now.

CLERK: No no no. She's not a dud. She's… she's listening to the middle-class! Remarkable candidate, Hillary Clinton. Beautiful pants-suit!

ACTIVIST: The pants-suit doesn’t enter into it. She’s a complete dud.

CLERK: Nononono, no, no no! She’s listening!

ACTIVIST: All right then, if she's listening, I'll get her attention! (shouts at cage) Hello! Hillary! Hillary Clinton!! I've got a lovely speaking fee for you!...

ACTIVIST: No, she didn't, that was you hitting the cage with an op-ed!

ACTIVIST: Yes, you did!

CLERK: I never, never did anything...

CLERK: No, no. No, she's stunned! You gave her a concussion!

CLERK: Yeah! You stunned her just as he was surging in the polls! Hillary stuns easily, you know.

ACTIVIST: Um... now look... now look, comrade, I've definitely had enough of this. This candidate is a complete dud, and when I offered my support not half an hour ago, you assured me that her total lack of movement was due to it being tired and shagged out following a prolonged period of international travel and Republican attacks.

ACTIVIST: HIDING FROM SERBIAN SNIPERS!?!?!?!?!?!? What kind of talk is that?? Look, why did she fall from the poll and lie on the floor of the cage the moment I got her home?

ACTIVIST: Look, I took the liberty of examining this candidate when I got her home, and I discovered the only reason that she had been sitting so high up on the poll in the first place is Jimmy Carville had pegged her there.

CLERK: Well, of course she was pegged there! If he hadn't pegged her there, she would have nuzzled up to the press, done an issues interview on MSNBC, and… VOOM!

CLERK: No no no! She’s hiding from Serbian snipers…

ACTIVIST: She’s not hiding from snipers! She’s hiding from reality! This candidate has ceased to be! Her buzz has expired and she’s going to staged meet-ups! She’s a stiff! Bereft of youth, she is yesterday’s news! If someone hadn’t pegged her on that poll she’d be busy baking cookies in Chappaqua! Her political career is now history! She’s off to give speeches! She’s passed the buck! She let diplomats shuffle off this mortal coil, and her emails have joined the choir invisible! SHE IS AN EX-CANDIDATE!

CLERK: Well, I'd better replace her, then. (looks behind counter) Sorry, I've looked around the back of the shop, and uh, we're all out of Clintons. Bill is term limited, and Chelsea is too young.

ACTIVIST: I see. I see, I get the picture.

ACTIVIST: Does it talk?

ACTIVIST: WELL JOE BIDEN IS HARDLY A REPLACEMENT, NOW IS HE!?!?!?!?

CLERK: (excited voice, slams palms on counter) WHAT DIFFERENCE, AT THIS POINT, DOES IT MAKE?!?!?

CLERK: (hushed voice) Do you… do you want to come in the back and I can show you an Elizabeth Warren candidacy?